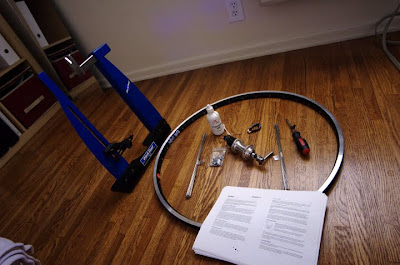 The photo shows everything you need to build yourself a bicycle wheel. Missing from the picture is a guitar plectrum, an important tool that lets you use tone to equalise spoke tension. (You could use your nails or an old credit card of course, but a plectrum is far more fun, and makes a louder sound).

My first wheelbuild is documented on this thread on Indian bike forum, Bikeszone. This is my fourth build, and the first time I used a truing stand. Things are a lot easier now--the wheel comes together with very little play to start with, so there are relatively few final adjustments. I don't think I'd want to build wheels for a living, but I really enjoy it when it's spaced out like this. (Four wheels over two years or so.) I also take a day or two between lacing and final tensioning. 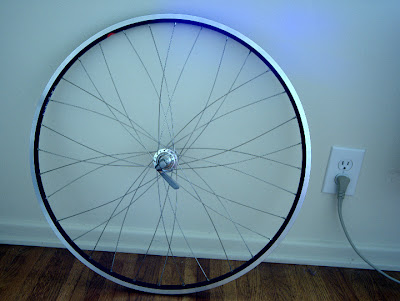 This is the wheel just after lacing. Then you plug it into the socket and zap all the spokes straight. It's a patented technique and demands great skill. Don't try it at home! 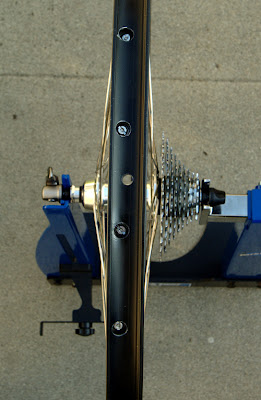 Here's the built wheel. Note the valve hole at the centre of the photo, and you can clearly see how much off centre the drillings are for the spoke holes. Follow the spokes to the hub and notice how small the dish is. That's the advantage of using an off-centre rim. (You'd use one on the front if you were building wheels with disc brakes.)

Roger Musson isn't too fussed about choosing off-centre (or OC) rims, saying that if there was something wrong with regular rims, we'd have heard about it by now. However, Peter White, well-known wheelbuilder, writes on his website of the Velocity Aerohead (and implying OC rims in general): "The OC rim is a big advantage when built on a high dish rear hub like the current Campagnolo hubs, but less of an issue on Shimano hubs. But if you're having a set of Shimano wheels built and want the Aerohead it's silly not to use the OC version in back. It only costs $1 more, and gives you a wheel that's close to ZERO dish!"

I've also written about wheelbuilding in an Off the Cuff, here.
Posted by Minkey Chief at 1:58 PM

Email ThisBlogThis!Share to TwitterShare to FacebookShare to Pinterest
Labels: DIY/repair